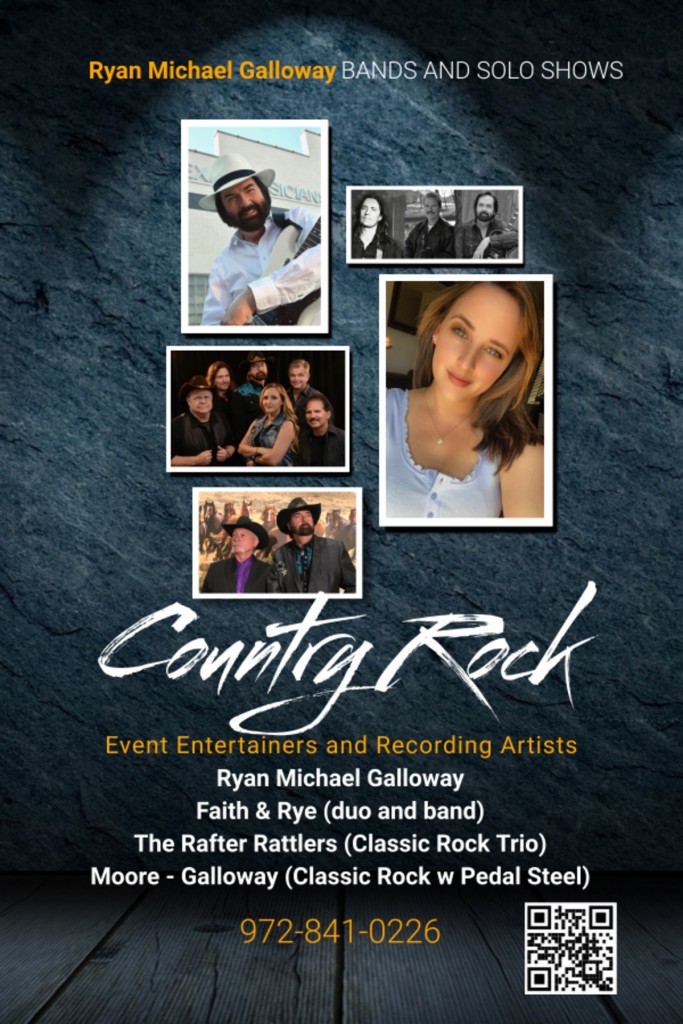 Ryan Michael Galloway has several bands and solo options for your event or venue.  You can book these acts through direct contact with the team at 972-841-0226, [email protected], or the contact page on this website.  You may also book any of these acts through your favorite local, regional, or national booking agency.  Should you choose to make contact through an agent, our policy is to never circumvent them.  In that case, you will only be able to book through the agent going forward.  Most of the configurations are self-contained, providing full sound systems and lighting.  Consult with the team concerning sound and lighting requirements for excessively large venues.

Across the different bands and configurations below, we concentrate on Country Rock and Classic Rock, which may include original music from recent album releases, and/or songs from acts such as The Eagles, The Doobie Bros., Carey Underwood, Little Big Town, The Beatles, CSN, Adele, John Mayer, Cat Stevens, James Taylor, David Gray, The Allman Bros Band, Kenny Loggins, Toto, James Brown, Van Morrison, Tom Petty, Bob Seger, and many others.

Ryan Michael Galloway – Solo Country Rock and Classic Rock Performances
Mr. Galloway brings his decades of experience to your stage or your living room.  Your venue/event may need “environmental” background suitable for pleasant meals, drinks, and conversation–or you may want a real entertainer, with stories and humor to give your crowd a night to remember.  Whether it’s an intimate cocktail hour or a 10,000 seat hall, he has the range to adjust the situation–even if it’s all within the same engagement!  He does not use backing tracks, but has developed a unique combination of digital trickery to create harmonies and loop on-the-spot recordings right in front of the audience to create a full sounding and intriguing show, with flashy guitar playing and soaring vocals. Blues harmonica rounds out the sound for some wailing fun.

Ask about House Concerts–free to the hosting household and available nationwide.  The music will be primarily original, and the accompanying stories and banter make for a memorable event for your friends, with lots of smiles and perhaps a few tears.  This not background music for your house party; this is a sit down and watch concert and command performance right in your home or backyard.  CDs will be available for sale, and donations from the attendees will be appreciated and encouraged after the show.

Faith & Rye – Duo and Full Band Texas Country Rock, Classic Rock, and Original Music
The band can be anywhere from a duo, suitable for your small party, to a full seven-piece rockin’ band.  In it’s full configuration, Faith & Rye front a team of musicians including bass, drums, keyboards, pedal steel guitar, and fiddle.  While the duo has played in both large and small venues, the full band is most applicable for large outdoor gatherings, venues of several hundred audience members, or warming up for a larger act.  This songwriting duo has already released their first album and is currently in the middle of their second album project (as of November 2021).  The material from the upcoming album will be released to the public one song at a time to increase exposure, and the first single has already been aired in a limited release.  The duo will launch their Patreon site in the near future, and their first album (A Prayer and a Shot of Whiskey) is available on all major streaming services, including Spotify.

Faith Boyd (nee Vicknair) supplies knockout vocals sure to pull at your emotions, and writes many of the bands songs.  Mr. Galloway also serves songwriter, as well as the music director, producer, and performer with the band.  The two are longtime friends and collaborators with an undeniable personal and musical chemistry.

The duo is also available for house concerts nationwide.

The Rafter Rattlers – Country Rock and Classic Rock “Power Trio”
If you just want to get down and rock and roll, Mr. Galloway brings his friends Chad Ireland (drums), and Eric Sykes (bass) together for an energetic show that will bring back memories and get your heart pumping. The group has played a range of venues from small nightclubs up to the Texas Motor Speedway.

Moore – Galloway: Classic Rock with Pedal Steel Guitar
Kerry Moore joins Mr. Galloway to add a Country spin to Classic Rock, performed the way God intended (haha) with an award-winning pedal steel guitar player!  Think back on Classic Rock music of the past, and you may remember pedal steel from the recordings of Elton John, James Taylor, The Grateful Dead, CSN&Y, The Eagles, Steely Dan, and even The Rolling Stones.  The amazing sound of this instrument will NOT disappoint, in the hands of Mr. Moore, a true artist.  Just like Faith & Rye, this duo is applicable for a wide range of venues and events.  They are probably most appreciated in small intimate surroundings, but can certainly handle a big crowd.